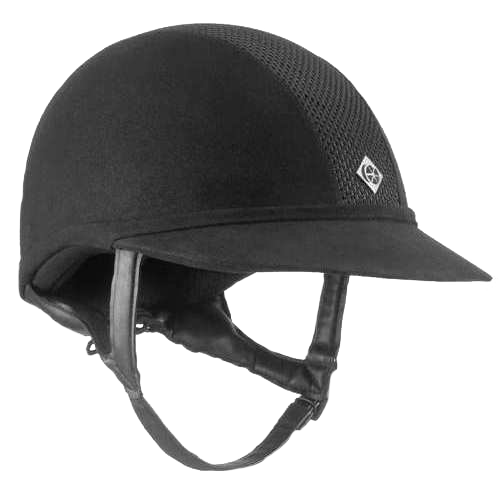 Before a helmet can even begin to head to the first step of production, Charles Owen has to decide what kind of helmet needs to be made. Charles Owen offers a wide variety of helmets that suits the needs of every equestrian. The designers pay close attention to trends in both equestrian and mainline fashion as well as safety and technological innovations before coming up with hundreds of designs, which are then whittled down to a few products that are worthy of the Charles Owen brand. Each helmet released is a direct result of what riders need and want.

The length of the process from first idea to hitting the shelf varies from helmet to helmet. In 2012, Charles Owen released three new products for which the process took six months, one year, and two years.

The Charles Owen SP8 is the perfect example of following the needs of the riders. As people have become more and more aware of protecting their skin from the sun, riders who spend long hours riding outdoors were looking for a helmet that could provide extra protection from the sun, be cool, and still have the ultimate in safety standards. The SP8 gave Charles Owen the chance to incorporate new technologies that were in development to keep the rider cool.

At the beginning of 2012, Charles Owen released the SP8, but the process was actually started way back in 2011. After the team decided to move forward with the new product, sketches were made of the design to determine the area of shade from the visor, location of the vents, and the integration of the new technology into the helmet. The Charles Owen focus is to figure out a way to solve the rider's problems while maintaining the highest standard of safety.

Once the sketch is selected, a 3D model is made for a computer analysis of the design to fine-tune the safety standards for which Charles Owen is famous. Some of the components that the computer can analyze within the design are the strength of the microscopic bubbles, the airspace at the top of the helmet, and the strength and width of the shell - all integral parts of the protection in Charles Owen helmets. Computer analysis is the technical step in figuring out whether there is enough performance in the helmet to pass the rigorous safety testing that is still yet to come. As the helmet continues along in the high-tech world of Charles Owen, the computer takes the model and adds in the necessary adjustments to the precise measurements which is then computer carved to become the master component mold. These molds are then 'graded' to adjust what the helmet will look like at all the different sizes offered, and a family of molds is then created. Charles Owen uses its collection of head shape references to see how the molds look and fit on all the various head shapes that exist. Once the molds have been tweaked to perfection, the two halves of the tool are created in aluminum so that the machinery and Charles Owen employees can create the fiberglass shells and EPS liners that are the building blocks for the helmets. Nearly 40 prototypes are produced for submission to the safety certifications for approval and then released to a handful of respected riders for valuable feedback.

Pilot runs and quality specification sheets are generated to ensure each and every helmet can meet the demands of wearing the Charles Owen badge. So the helmets start to be manufactured and the Charles Owen marketing team starts to work on getting the word out about the new helmet. The final, but one of the most important steps, is the training that is done in all of the stores that carry Charles Owen products to teach the sales staff how the new helmets differ and how they fit, so that they can in turn show the customer how the helmets should work and fit.

The process of producing a new helmet may seem arduous (especially for those that work at Charles Owen), but this is only scratching the surface of the Charles Owen method. Stay tuned for the next article of Behind the Badge, a look into the materials that make up a helmet and how they come together to create the safest product possible.